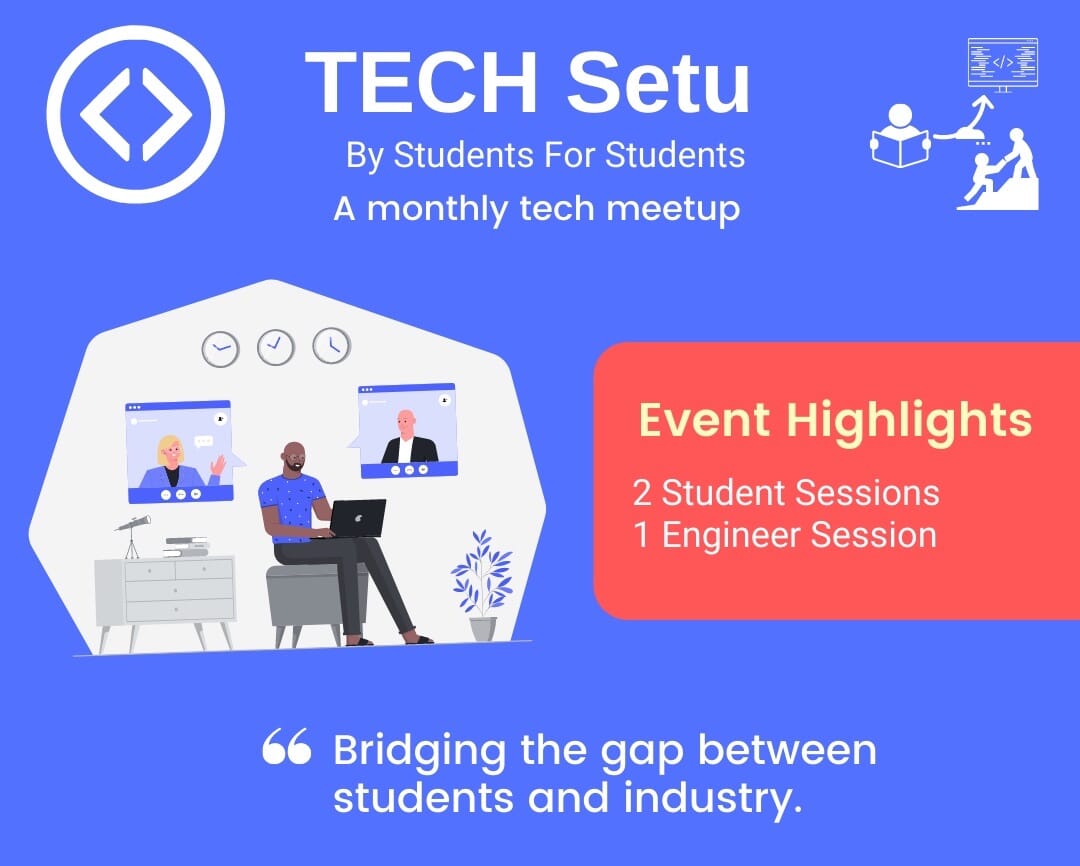 TECH Setu is a student-led non-profit initiative with a mission to bridge the gap between IT Industry and Students. In the pursuit of our mission, we conducted our first monthly tech meetup on 12th June 2021, Saturday. Since it is the first monthly meetup of TECH setu, so preparing everything from scratch was a necessity.

For this event, we decided to have two student speakers, one industry speaker, and one keynote speaker. The theme of the event was “community building and career guidance”. The event was targeted especially for IT Students who wanted to learn and grow in the IT Industry.

For our first meetup, we selected our speakers through our friend circle or those who were advised by our mentors. We had a brief meeting with our speakers to talk about their topics and for confirmation of the event.

The promotion of the event started on 3rd June with the announcement of the Industry Speaker, Mr. Bikalpa Dhakal on the TECH Setu’s official Facebook page. The registration form was opened from the very first day. We used social platforms like Facebook and LinkedIn as our outreach and promotion platforms. Similarly, with a time gap of two to three days, we kept on posting about our event to grab the necessary attention of the potential audience. The announcement of two student speakers which includes female speaker Miss Sindhu Aryal and Mr. Asim Tara Pathak happened a couple of days after the previous speaker’s announcement. Finally, three days before the event, we announced our keynote speaker Mr. Budh Ram Gurung who was sharing his invaluable insights on the “Beautiful relationship between IT Degree and career paths”. 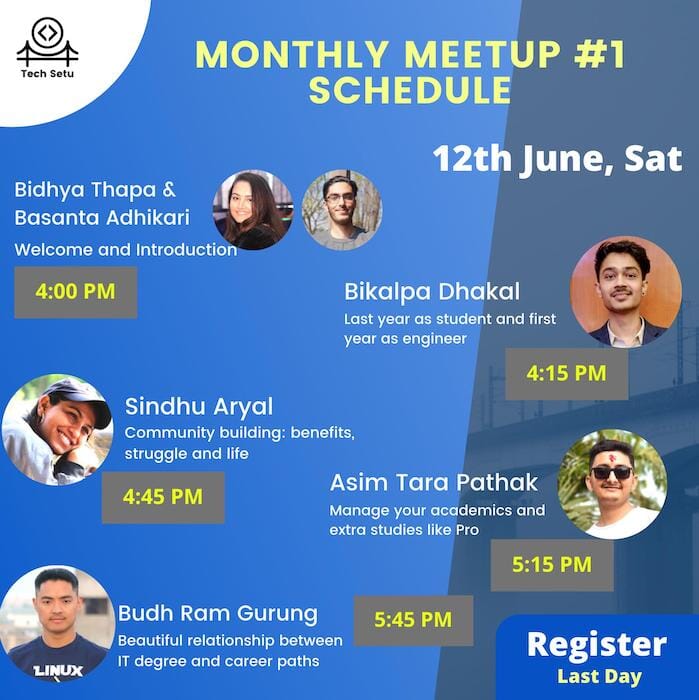 The event started at its specified time from 4 pm onwards and officially ended at 6:30 pm. There were around 50 participants which included the members of TECH Setu, mentors, and speakers. It was moderated by me and Basanta. We welcomed and gave a brief introduction of the organization and its initiative. Along with a meeting with the Zoom app, the event was being live-streamed through our official YouTube channel. 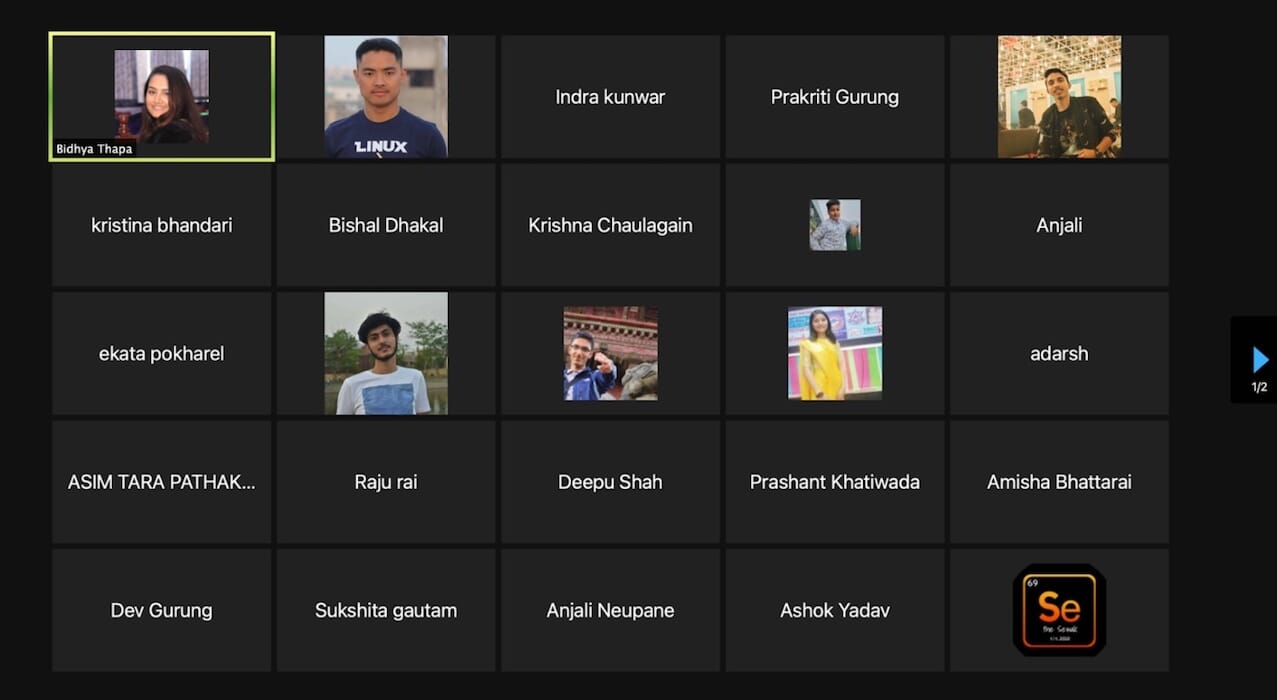 Our first speaker, Mr. Bikalpa Dhakal started the session with the topic “Last year as a student and first year as an engineer”. He shared his experiences from entering into a Bachelor’s of Engineering with no knowledge of Software to now as a Software Engineer. He also suggested every IT student participate in IT Events like hackathons and explained the importance of networking and portfolio building. Focusing on final year students, he suggested making an attractive CV and applying for the vacancy as they come across them. Lastly, he suggested making a professional Linkedin profile and keeping a learning attitude.

The next speaker was our first female speaker, Ms. Sindhu Aryal who holds the role of president of Butwal Coder Girls. She shared her journey of community building ranging from Rotaract Club to Butwal Coder Girls and Girls in Tech Nepal. She also talked about the benefits of the community like support systems, sharing space, networking, development of soft skills, event management, and the value it adds to the CV. Also, she urged students to join the community and equip themselves with basic IT skills.

Our other amazing student speaker Mr. Asim Tara Pathak, who is also an executive member of TECH Setu, talked about Smart study, time management techniques and urged everyone to share their knowledge in order to increase the horizon of one’s knowledge. He concluded his speech by requesting everyone not to limit themselves in the college syllabus and think out of the box.

Lastly, our keynote speaker Mr. Budh Ram Gurung, who has nearly 10 years of experience in the IT field and the initiator of TECH Setu, shared his learnings and findings of IT education and students’ conditions in Nepal based on his last two years of analysis. He talked about the different career pathways and roles as well as responsibilities in the IT field. The best part of his talk was the way he described the relationship between different college degrees and their industrial prospects. 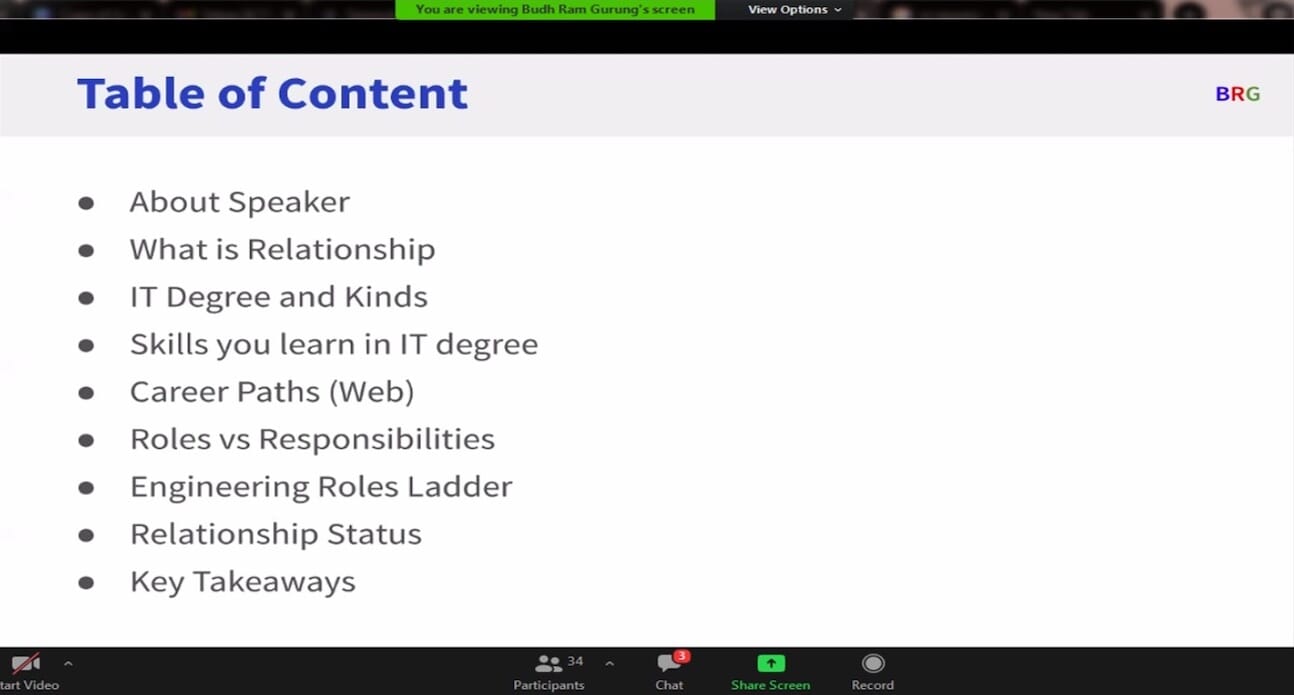 The official end of the program was done with the vote of thanks by Mr. Basanta Adhikari.

And, we are equally thankful to our audience for making this first monthly meetup of TECH Setu a huge success.

Last but not the least, congratulations to all the TECH Setu members who had put their hard work and effort into conducting this event.

We expect you all to meet you in the second monthly meetup as well.

In case you missed the event, you can go through the following video and help yourself.